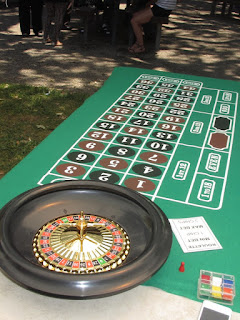 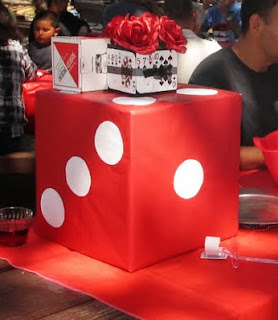 Since 2000 I have tried making our family parties as fun as possible. Even though I loved attending parties I always seemed to be bored with the same ol' games. Well, until someone begins inventing new games...I had to deal with it. HOWEVER...by adding a fun new twist to some old party games I was able to make our parties genuinely fun once again. Here is how I did it.
Back in 2011, for my parents 50th Wedding Anniversary Party I had a Casino Themed party, instead of the Baby Shower Paper Bucks (detailed below in Baby Shower AUCTION), I purchased a good amount of Poker chips.
As each guest arrived, they each got a small bag with 30 chips to play with, period! Win or lose. (Not everyone is a winner in a Casino)
We set up casino type games, i.e., Black Jack, Roulette, and Craps and our guests played like they would in a Casino... winning "game chips".
Since, not everyone has good luck or plays well at the casino table games, I also placed decks of cards on the tables for those who wanted to play one on one, slowly winning chips from other guests. And, we set up a Keno style Bingo game. 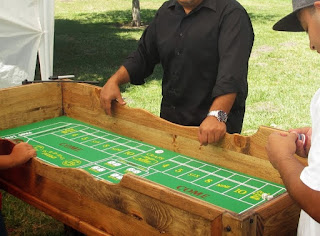 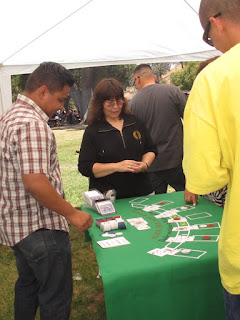 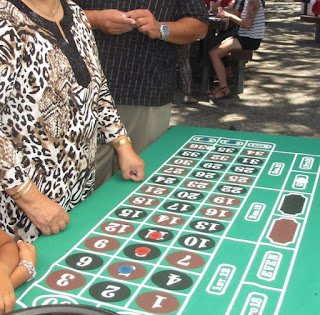 What I did differently from the Baby Shower AUCTION (below) was AUCTION OFF PRIZES DURING THE PARTY. I purchased prizes months before that actual party in order to keep costs down and to find great deals on great items. Our main prize was a Kindle Fire and Keurig Coffee Machine. These were the prizes that everyone wanted, so, in order to lessen the quantity of potential winners for these prizes, I AUCTIONED off bottles of Wine, a Coach wallet, Gift Certificates and Lottery Scratchers during the party.
One of my guests won a COACH WALLET FOR 30 POKER CHIPS!! What a steal. All because the other guests were trying to save up till the end.
Our casino games went on for about 2 hours and when we finally shut them down...people were actually disappointed and plead for more time.

When the AUCTION began I started seeing guests pull their poker chips together in order to help one person win. I thought to myself that this would cause a ruckus, however, everyone began doing it. (So it is up to you if you want to try and stipulate no sharing chips??, good luck on that). 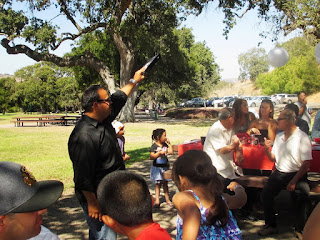 One by one lift up a PRIZE and ask who would be willing to spend their poker chips for that gift...the highest bidder wins the prize! The results are HILARIOUS!!!
My guests were so EXCITED they began screaming out the amount of poker chips they had. 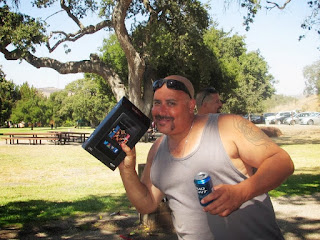 Back in 2002 when my daughter was ready for her baby shower...the concept of having a baby shower AUCTION happened as I reminisced about the old Antique Auctions I attended at a place called McCoys. The adrenaline of bidding was what kept me going back for more!!!

Here is how I began.
1. Instead of purchasing a bunch of little game prizes, I purchased a few larger items. For my daughter's baby shower I purchased a stick Ipod for about $70.00.. yes it was years ago. I also purchased large jars of Yankee candles on Ebay.. so I did not pay full price for them. I purchased a Coach makeup bag, also on Ebay for about $30.00, again not paying full price for it.
2. I printed up "Baby Shower Bucks". Enough to give every guest at least one when they arrive. This is when I explained to them how the event would take place.
a. You get an initial payment of Baby Shower Bucks 1 or 2 is good enough just for showing up.
b. For every party game played (i.e., Baby Shower Bingo, or Ice Cube Baby Birth) there would be a 1st, 2nd and 3rd place winner. 1st place would get, let's say a $15.00 baby shower buck, 2nd place would get $10.00 and 3rd place would get $5.00. MY GUESTS WOULD NOT GET A "PRIZE" FOR WINNING... they would get baby shower bucks instead.
c. At the end of the baby shower (Wedding Shower, Birthday, etc) there would be an AUCTION FOR THE PRIZES!! (I.e., the Yankee candles, moving your way up to the biggest prize.. the IPod.)

One by one lift up a PRIZE and ask who would be willing to spend their baby shower bucks for that gift...the highest bidder wins the prize! The results are HILARIOUS!!!
My guests were so EXCITED they began screaming out the amount of baby shower bucks they had.